Why Christ Ahnsahnghong is our God.

Heb 9 :22 In fact, the law requires that nearly everything be cleansed with blood, and without the shedding of blood there is no forgiveness.

It explains that the forgiveness of sins is given through the shedding of blood.

Eph 1: 7 In him we have redemption through his blood, the forgiveness of sins, in accordance with the riches of God’s grace

Mattew 26: 26~28 While they were eating, Jesus took bread, and when he had given thanks, he broke it and gave it to his disciples, saying, “Take and eat; this is my body.” Then he took a cup, and when he had given thanks, he gave it to them, saying, “Drink from it, all of you. This is my blood of the covenant, which is poured out for many for the forgiveness of sins.

Heb 10 :28~29 Anyone who rejected the law of Moses died without mercy on the testimony of two or three witnesses. How much more severely do you think someone deserves to be punished who has trampled the Son of God underfoot, who has treated as an unholy thing the blood of the covenant that sanctified them, and who has insulted the Spirit of grace?

The way to be clothed with the grace of God's precious blood, is granted only to those who keep the Passover.


Ultimately, only those under God's grace, who participate in the Passover bread and the Passover wine, can participated in the precious blood of Jesus Christ.
The reason Satan prevented mankind from following the covenant God appointed, was that only they could be grag them away from the forgiveness of sins.
In doing so, God's children would not be able to receive the forgiveness of their sins, and will eventually enter the eternal fiery pits of hell.
This is Satan's greatest desire.
The bible expains that God gives the forgiveness of sins to those who keep God's covenant, and that they will receive eternal life.
However the Passover of the New Covenant was abolished in A.D 325 so it was hidden for long ages.
In this age, Christ Ahnsahnghong brought the Passover of the New Covenant at his second time.

Micah 4: 1~2 In the last days the mountain of the Lord’s temple will be established as the highest of the mountains; it will be exalted above the hills, and peoples will stream to it. Many nations will come and say, “Come, let us go up to the mountain of the Lord, to the temple of the God of Jacob. He will teach us his ways, so that we may walk in his paths.” The law will go out from Zion, the word of the Lord from Jerusalem. 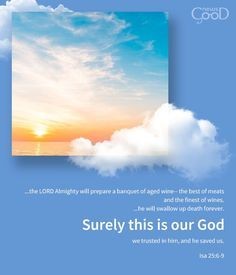 Total 8
« Let us know about true God
How can we receive the forgiveness of sins from God? »
List Reply
Edit Delete
Total 1,882
New
Powered by KBoard