Author
Debbie
Date
2021-03-29 07:47
Views
330
Jerusalem has been the holiest city and the ancestral and spiritual homeland of the Jewish people since the 10th century BCE. During classical antiquity, Jerusalem was considered the center of the world, where God resided. Therefore, many people make pilgrimage to Jerusalem every year, even spending a large amount of money.

However, the Bible teaches that there is not only earthly Jerusalem on earth but also Heavenly Jerusalem, which is the reality, exists in heaven.

Revelation 21:9-10 One of the seven angels who had the seven bowls full of the seven last plagues came and said to me, “Come, I will show you the bride, the wife of the Lamb.” And he carried me away in the Spirit to a mountain great and high, and showed me the Holy City, Jerusalem, coming down out of heaven from God.

In order to receive eternal spiritual blessings, rather than the physical blessings that will disappear soon, shouldn't we make a pilgrimage to Heavenly Jerusalem? But we can never enter heaven with this perishable body. But to our surprise, the Bible prophesied that Heavenly Jerusalem will come down from heaven to earth.

Revelation 21:10 …and showed me the Holy City, Jerusalem, coming down out of heaven from God.

And the reality of this Heavenly Jesualem is our Heavenly Mother.

Galatians 4:26 But the Jerusalem that is above is free, and she is our mother.

God can abandon us, who are sinners, but She came to this earth in human likeness and has been walking down the path of hardship and suffering at this moment. Let's not forget how great is the love and sacrifice of our Heavenly Mother and become mature children of God. 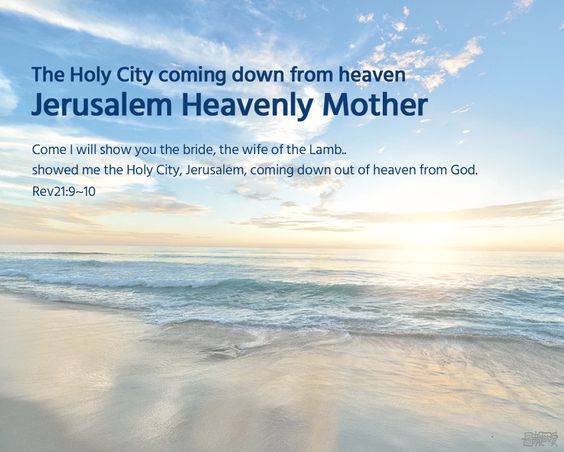 Total 6
« Jesus broke bread on the day when He was resurrected.
God's love even to the point of great suffering »
List Reply
Edit Delete
Total 1,687
New
Powered by KBoard