Why does WMSCOG keep the Passover? are they Jewish?

Author
Minenhle
Date
2020-11-16 01:35
Views
43
WMSCOG keeps the the Passover. Some people wonder that they are Jewish.
Jesus kept the Passover as Jewish?
He lived as a savior not a Jewish after He was baptized.
Then when did He keep the Passover? After baptism or before?

Lk 3:21 - When all the people were being baptized, Jesus was baptized too.

Lk 22:8 - Jesus sent Peter and John, saying, "Go and make preparations for us to eat the Passover."
Lk 22:19~20 - And he took bread, gave thanks and broke it, and gave it to them, saying, "This is my body given for you; do this in remembrance of me."
In the same way, after the supper he took the cup, saying, "This cup is the new covenant in my blood, which is poured out for you. 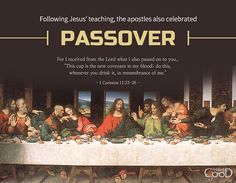