Author
Debbie
Date
2021-06-14 10:07
Views
289
There are many churches in the world, and they all insist that they are the ‘true children of God’. God is the only one who can judge whether something is true or false. In the Bible, through the history of Abraham’s family, let us see who became the heir and who the heavenly children are. According to the Bible, Abraham represents God Himself figuratively and therefore Abraham’s children represents God’s children (Luke 16:19-24).

There were three heirs who were eligible to inherit Abraham’s estate in Abraham’s family. The first was Eliezer the servant, the second was Ishmael and the third was Isaac.

In regard to the first candidate, Eliezer, God said, he was ‘not’ Abraham’s heir. Thus, Eliezer was the first to be eliminated from becoming Abraham’s heir (Genesis 15:2-4).

Ishmael was born as the second candidate. Ishmael’s father was Abraham and his mother was Hagar, who was a slave. God said to Abraham, who was trying to give his estate to Ishmael, ‘He will not be your heir.’ Thus, Ishmael was also eliminated from becoming Abraham’s heir (Genesis 17:18-19).

The third candidate was Isaac. Isaac was born of his father Abraham, and his mother, Sarah, who was free. Even before Isaac was born, God promised Abraham, “I will establish an everlasting covenant with Isaac” and through that promise Isaac was guaranteed to be the heir of Abraham.

Gal. 4:26 “But the Jerusalem that is above is free, and she is our mother.”
Gal. 4:28-30 “Now you, brothers and sisters, like Isaac, are children of promise. At that time the son born according to the flesh persecuted the son born by the power of the Spirit. It is the same now. But what does Scripture say? “Get rid of the slave woman and her son, for the slave woman’s son will never share in the inheritance with the free woman’s son.”
Gal. 4:31 “Therefore, brothers, we are not children of the slave woman, but of the free woman.”

To become God’s heirs as children of the promise, let's believe in and follow God the Mother, a decisive factor that can allow us to inherit the kingdom of Heaven. 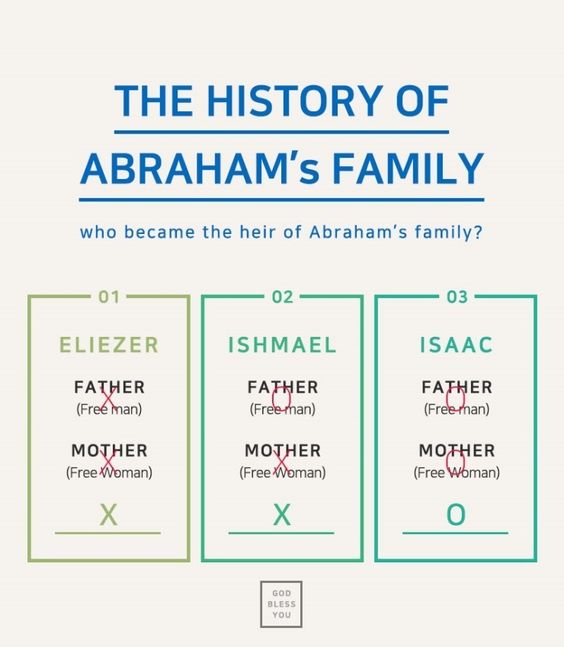 Total 4
« The Last Prophecy in the Bible.
The word of God is absolute. »
List Reply
Edit Delete
Total 1,882
New
Powered by KBoard