Author
Isabella
Date
2020-11-16 03:53
Views
258
Many Christians celebrate Jesus' birth on Dec. 25th ----Christmas
However, nowhere in the Bible does it say that Jesus was born on December 25.
How, then, did it come to be associated with Jesus' birthday?
This pagan custom of sun worship was introduced into the church, which became Christmas.

[The International Standard Bible Encyclopedia, Volume 4,-W.B.Eerdmans Publishing Co.]
--Mithras--
Mithras was identified with the sun-god; he appeared in Rome with the title Unconquered Sun-god Mithras... Mithraism had an influence on Christianity. December 25 was the birthday of Mithras... 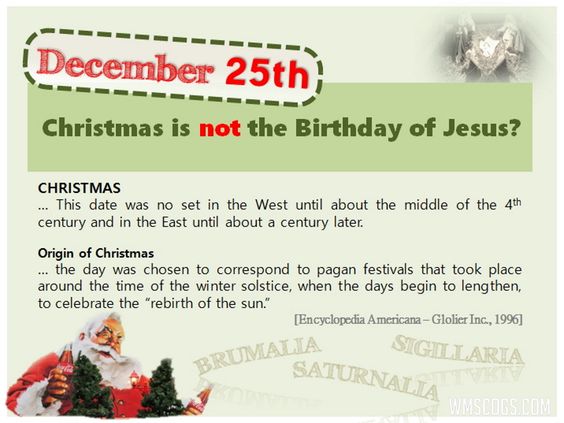 Total 11
« Why does WMSCOG keep the Passover? are they Jewish?
The Spirit and the Bride who give the water of life »
List Reply
Edit Delete
Total 671
New
Powered by KBoard