Author
Minenhle
Date
2020-11-30 06:14
Views
636
In the Bible, There are many people who were blessed by obeying the words of God absolutely. Let us think about the faith we must have, through them. Let us look at the case of Noah first.

Ge 6:14~16 - So make yourself an ark of cypress wood; make rooms in it and coat it with pitch inside and out. This is how you are to build it: The ark is to be 450 feet long, 75 feet wide and 45 feet high. Make a roof for it and finish the ark to within 18 inches of the top. Put a door in the side of the ark and make lower, middle and upper decks.

God commanded Noah to build a huge ark. the ark was three stories, and was over 1330 meters(450 feet) long. In those days, there was no shipbuilding technology like today. Even though shipbuilding technology is developed today, if a person is told to build a huge ship like the ark, it will be almost impossible for him to obey the order. Some scholars say that it must have taken Noah several decades to build the ark with the technology of those days. Noah must have also needed much manpower and material, and they must have cost a tremendous amount of money. However, Noah absolutely obeyed the command because it was the words of God. As a result, Noah and his family were able to be saved while others were destroyed by the flood. The case of Abraham was the same.

Ge 22:1~2 - Some time later God tested Abraham. He said to him, "Abraham!" "Here I am," he replied. Then God said, "Take your son, your only son, Isaac, whom you love, and go to the region of Moriah. Sacrifice him there as a burnt offering on one of the mountains I will tell you about."

Isaac was Abraham's only son whom he begat when he was on hundred years old. Abraham had his son after waiting for a long time, believing in God's promise that He would give him a son, so Isaac was the sign of God's blessing. To Abraham, Isaac was everything and he must have been a treasure more precious than his own life. However, God told Abraham to sacrifice Isaac as an offering. As a father, how must he have felt about that? Abraham must have felt life he had lost everything that he had dreamed of in a moment. Above all, it must have been unimaginably difficult for Abraham, a father, to kill his son with his own hands and offer him as a burnt offering. However, Abraham did not hesitate but absolutely obeyed God's words.
Without delay, he brought Isaac to Mount Moriah, the place God had appointed. When he was about to offer Isaac as a burnt offering, there was a voice from heaven.

Ge 22:11~12,15~18 - But the angel of the LORD called out to him from heaven, "Abraham! Abraham!" "Here I am," he replied. "Do not lay a hand on the boy," he said. "Do not do anything to him. Now I know that you fear God, because you have not withheld from me your son, your only son."...The angel of the LORD called to Abraham from heaven a second time and said, "I swear by myself, declares the LORD, that because you have done this and have not withheld your son, your only son, I will surely bless you and make your descendants as numerous as the stars in the sky and as the sand on the seashore. Your descendants will take possession of the cities of their enemies, and through your offspring all nations on earth will be blessed, because you have obeyed me."

Abraham regarded God's words as absolute, and as a result he got his loving Isaac back and received a promise of far greater blessing. like Noah and Abraham, those who absolutely obeyed God's words were always blessed by God abundantly. 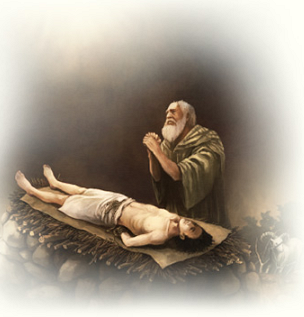 Total 8
« What we fix our eyes on!
Where were we before the earth was made? »
List Reply
Edit Delete
Total 1,547
New
Powered by KBoard