Where were we before the earth was made?

Proverbs 8:22~24
'The Lord brought me forth as the first of his works,' before his deeds of old; I was appointed from eternity,from the beginning, before the world began, When there were no oceans, I was given birth, when there were no springs abounding with water;

Job 38:4,21
"Where were you when I laid the earth's foundation? Tell me, if you understand.......Surely you know, for you were already born! You have lived so many years!"

Romans 6:23
For the wages of sin is death, but the gift of God is eternal life in Christ Jesus our Lord.

If so, how do we return to our hometown, heaven?
Only those who have been forgiven of their sins committed in heaven can return to heaven again.

Ephesians 1:7
In him we have redemption through his blood, the forgiveness of sins....

Matthew 26:19, 26~28
So the disciples did as Jesus had directed them and prepared the Passover.
While they were eating, Jesus took bread...."Take and eat; this is my body."
Then he took the cup......"Drink from it, all of you. This is my blood of the covenant, which is poured out for many for the forgiveness of sins..."

Hebrews 11:15~16
If they had been thinking of the country they had left, they would have had opportunity to return. Instead, they were longing for a better country-a heavenly one.... 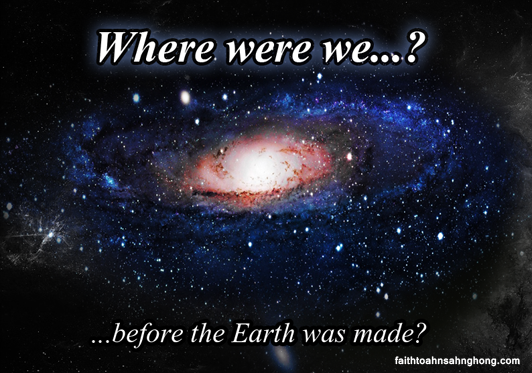 Total 11
« Noah and Abraham were blessed by obeying the words of God absolutely
Why do we need the water of life? »
List Reply
Edit Delete
Total 1,547
New
Powered by KBoard